So far the Best Most Awesome has been games and movies. Because what else is there in life, right?! As I’ve already mentioned, friends are for people who don’t own video games. I do leave the house quite a fair bit tho. To do what?! Well…I ride my bike. 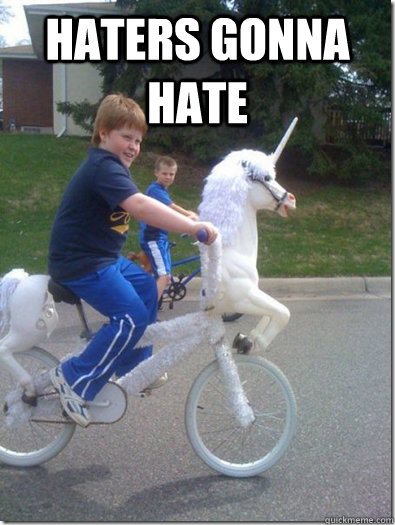 Yep, I ride my bike and shit. Around the yard, and if my mom lets me I can go all the way to the park and back.

Ok, that’s all you need to know about my cycling habits. Back to games! Fun fact: in the history of the known universe there has never been a good video game about bicycling. The closest possible game was Paperboy, which also had chromed freaking handlebars. 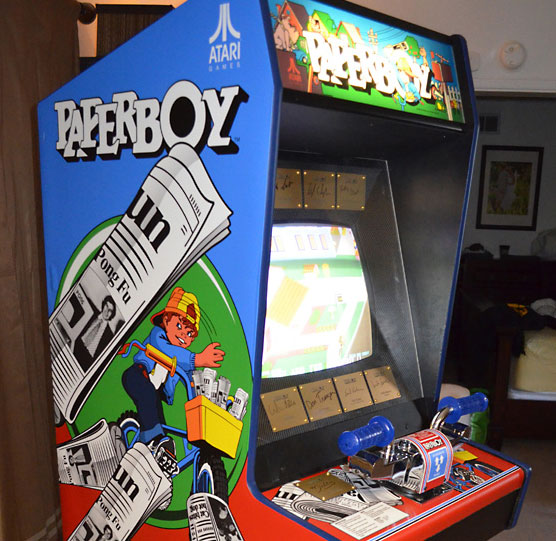 Most cycling ‘games’ are pretty stupid boring affairs, with a lot of talk about things like Functional Threshold Power, and video footage of some dude going up a mountain. While MAMILs may enjoy this stuff, everyone I know unanimously can’t stand it. It doesn’t stop tons of companies from making more boring training products thinking that maybe their shiny graph of power output will be cooler than that other company’s.

But then, there is Strava. Is Strava a game, a social network, or just a data tracker? Like many things, its what you want it to be. Keeping track of training data? Great. Want to conquer that KOM? Push for it! Want to meet people and socialize? I use Strava more than any social network.

What makes Strava so much better? I think because, unlike all these other companies, they’ve figured out that, sure, cyclists care about FTP and looking good in lycra, but that’s not the main reason we cycle. I ride my bike because…its fun. I use Strava because…it makes cycling more fun. 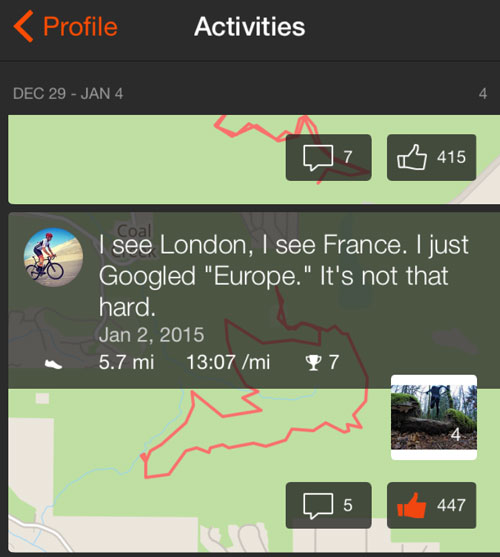 That’s a run from someone I don’t really know, who always posts great one-liners for his rides/runs. This fine gentleman, who as you can see is quite popular, has inspired me to do the same. In fact, I keep a joke diary and take notes just to help me come up with good one-liners for Strava. This guy, who I have never met, has driven me to compete on Strava with one-liners. 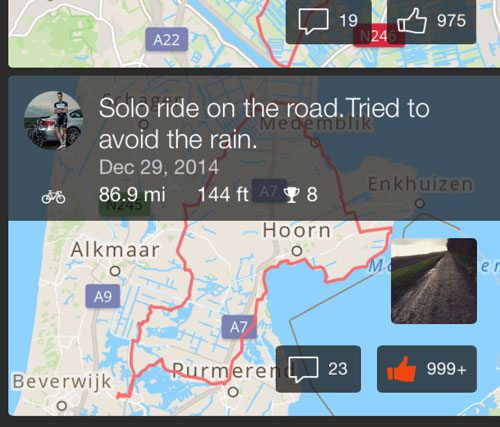 This is a ride from Niki Terpstra. He won the 2014 Paris-Roubaix, which was, for me, the best ride of the year. It was such an inspiring ride, I went and looked to see if he was on Strava (he was). And the actual Paris-Roubaix race that he recorded was up there!

So…games. I keep coming back to the gamification of cycling that Strava is/is not/could be. Gamification is generally a misguided attempt to manipulate people into working towards a goal they would otherwise not do. But Strava is gamification that works. I compete with others, with myself, and Strava enables me to level up, to engage more often, and ultimately have ‘player stories’.

And that last bit is key. Those stories up there? Player stories. Things that happened while I was using Strava  that were unique and interesting and I wanted to share them. Maybe player stories are the true secret to gamification? I’m not even sure these *are* player stories because I’m not sure Strava is a game. Regardless, if they are ‘just’ stories, Strava is still one of the Best Most Awesome of 2014.