Here in Part 1, I attempt to learn more about the history of stereoscopic photography. Part 2 involves converting this old photography into a Google Cardboard virtual reality app.

I was in a rather large antique shop in Globe, Az snooping around and I came across some rather interesting photographs: 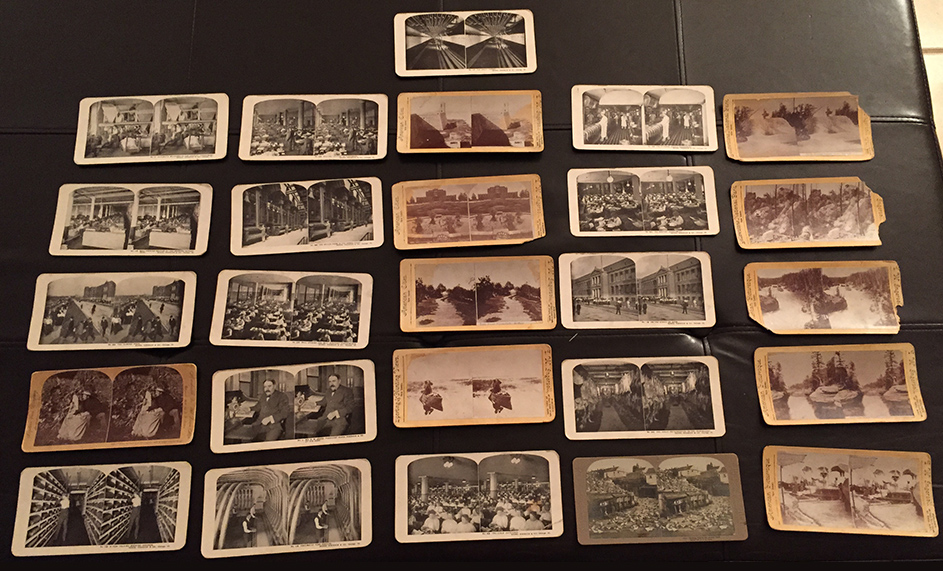 These are stereoscopic images taken in the late 1800s onwards. The selection they had, which I now own, generally fell into three categories: nature, cities, and the Sears-Roebuck offices.

These stereoscope cards are, unsurprisingly, put into a stereoscope. Most commonly for the Holmes Stereoscope, which was intentionally left unpatented so that an economical and simple stereoscope could be made.

Thousands of stereoscopes and many, many card sets were made. Some of these sets were available in book-shaped containers, with one hundred or more cards.

The images I bought all were a piece of thick white card with images glued onto them. The Sears Roebuck cards were simply printed copies.

Regardless they were quite fascinating to me in many ways. Partially because of what was considered worthy photographic subject matter. Here is where Sear’s stores its ‘talking machine records’.

The back of the card reveals that…yes…this was a subtle sales ploy:

I mean, if you own a stereoscope, chances are you are the sort of chap who’d love a talking machine, yes?

While these are interesting cards, my favorites were the higher quality photo cards. These cards were generally more interesting, and are genuine photos from the late 1800s, most likely circa 1890. The gorgeous sepias and continuous tones make these stand out.

Yes, this is…I don’t really know what this is. I mean, first these two are kissing: 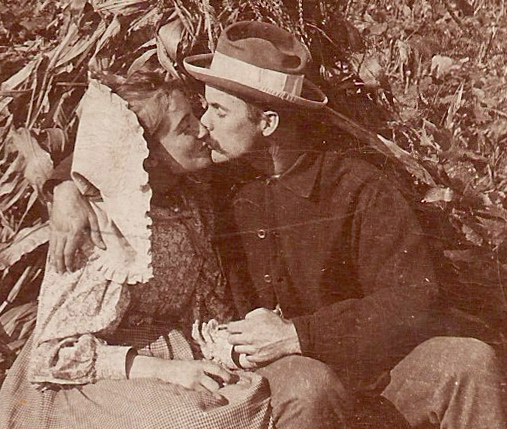 These two are sneaking a kiss in after their work is done (aka When the frost is on the pumpkin, and the fodder’s in the shock). I’m assuming this is supposed to be more funny than titillating, and at least she seems to be laughing. These two however are not: 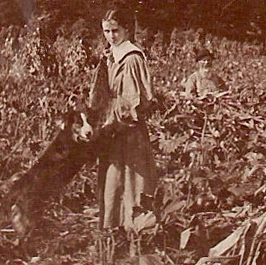 But hey, I’d look surly if I was stuck dancing with the dog, too.

So my first thought about these photos was…are these really stereoscopic? I do not actually own a stereoscope! But I do have a scanner and a few Google Cardboards for various projects. But before I go ahead and create an app for viewing these quaint (what better word for them than quaint?) images I figured I should verify they actually are stereoscopic.

At first glance, they do look like the same image. The imagery is rather small (the stereoscope has a magnifying effect). The images were cut out and glued by hand, making it more difficult to determine if the images were simply cut out a little to the left, and then to the right.

When I scanned the images and digitally superimposed them, I had no ‘registration point’ with which to determine the location of the images. It also seemed like there is a bit of vertical mis-alignment as well which I had to adjust for.

But for both my ‘talking machine’ and ‘kissing farmers’ image it became quite obvious that the images were indeed stereoscopic.

The row of corn is the most prominent detail, showing the parallax effect between the two cameras. It seems also that the parallax between the cameras is even exaggerated, making it much larger than the actual parallax that occurs between a person’s eyes naturally. Perhaps this was on purpose, or it was simply because the camera equipment required was so large.

While both cards were not very well ‘registered’ (ie calibrated for stereoscopic display) the talking machine card definitely was worse due to its rotation. The kissing farmers were vertically mis-aligned, but the talking machine was both vertically off and slightly rotated. I could only imagine this would make it quite difficult to get the correct stereoscopic effect.

But it seems to me that the usage of stereoscopic imagery was gratuitous and did not add much to the imagery. I’m not sure what value there is to seeing a hallway full of vintage vinyl in stereo, unless maybe you are a classic vinyl junkie. Perhaps the camera lenses of the time did not provide enough distortion to give the images a sense of perspective. It also seems like the calibration of the cards may have posed issues as well. I am very interested to see if there is something more to these images in 3D that becomes more immersive and fun.

And immersion is on my mind because now I will be attempting to bring these images into a 3D environment using Google Cardboard and Unity. Stay tuned for Part 2!