Let’s talk gameplay. What’s the difference between, say, ‘gameplay’ programming and other programming? If you are developing a game, you might need to make lots of things: shaders, engine, lighting, modeling, animation, in-app purchases, banhammers, web sites, the list goes on. 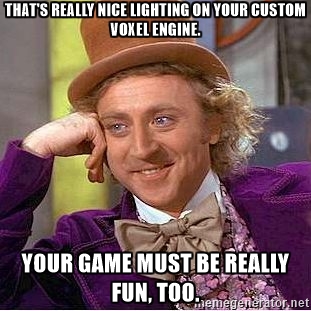 But these things do not a game make. Gameplay makes a game.

Gameplay is what you get when you combine all the things above and make a cohesive experience that people want to play. When prototyping this is the essential focus of your code. When I put on my gameplay hat and start a project, I ask myself:

Variety is the Spice of Life

Gameplay can also encompass AI, pathfinding, collisions, and much more. And doing things like applying AI to a game is definitely part of gameplay. But what I’m talking about here is that after coding a weapon or skill system, I make sure these systems allow for creation of weapons and skills, not a specific weapon or skill. If I spent all my dev time ‘all in’ on one concept, it is entirely possible my concept is not fun. But if the system was designed differently, I might find that I was just shy of the target, and a couple tweaks was all I needed, if I had tools & time to explore them.

I have created a small game project to more concretely illustrate these concepts (and others that I will be writing about soon™).

This game is a simple physics-based shooter. You shoot down the ‘Baddies’ in ‘Waves’. There is currently no win/lose condition or buffs, and only two baddies. But it does have a basic gameplay concept and that concept can be tweaked in order to see what works.

And this is key to gameplay. I want to translate the game’s design into tweakable parameters. With these basic building blocks:

Most importantly, all of the above can be done without coding anything. I could potentially hand this project off to someone else with some basic instruction and see what they come up with.

Game programming is very frequently tools programming. I once worked on a small commercial game that had no good tools. It took ages to make content. It was tedious, partially because of the need for so much manual data entry. Artists and designers would add stuff, and a developer would have to patch it together. Worst of all it was my fault because I didn’t have the forethought to focus enough on tools. I wonder how much time we wasted, and what ideas we could’ve made if only we made better tools.

I want freedom in the content creation process to explore the core game concept. I also want to do so quickly and efficiently so I can explore a lot of ideas. So how do I do that?

In the shooter, I’m using Unity and so I’m designing content using the Unity Editor. The editor provides hooks to display and edit data, and leveraging this functionality is the best thing you can do as a gameplay programmer. What do these knobs look like: 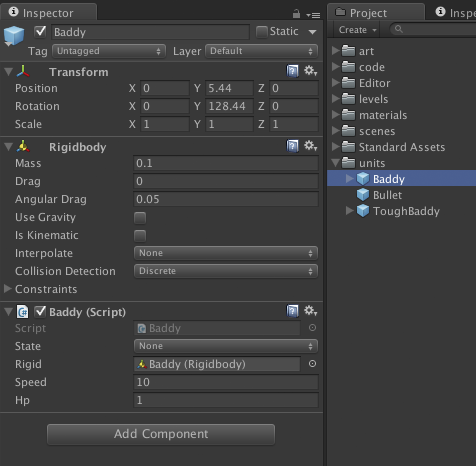 Additionally the level contains a number of spawn points that define the position and rotation of how things spawn: 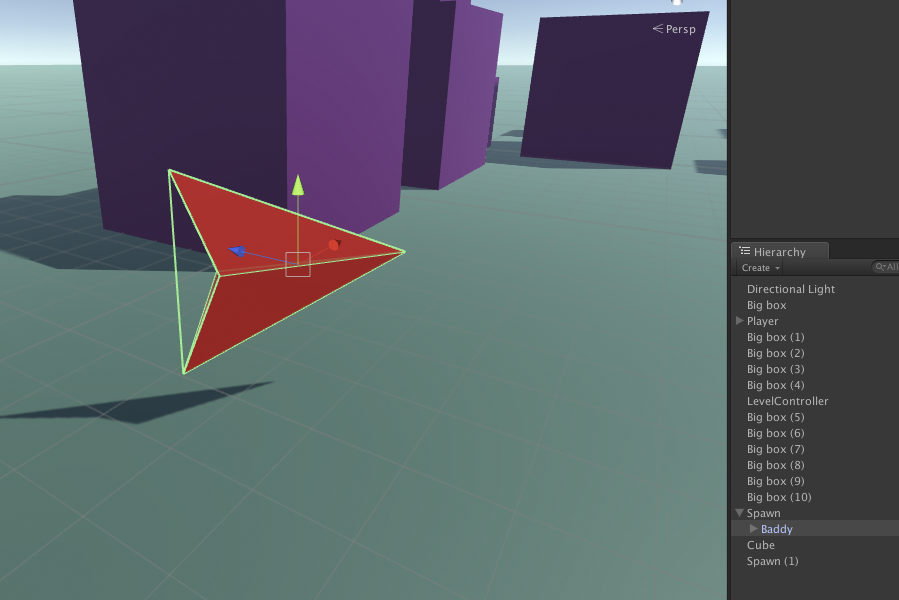 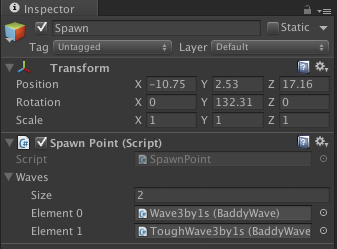 And waves? They are Monobehaviours on Prefabs. 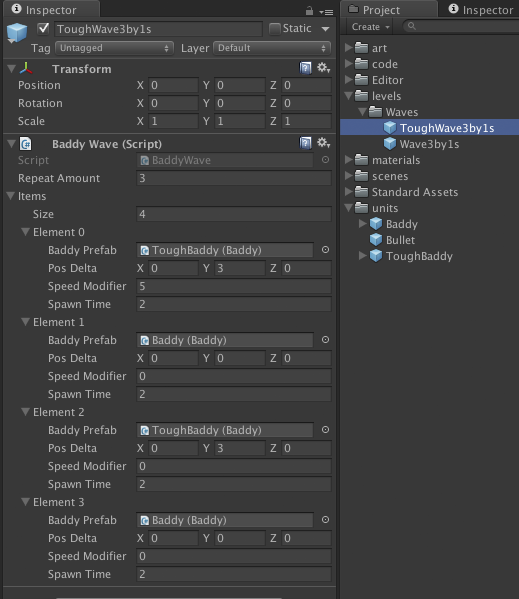 The code for waves is important because it provides an important intermediary step for creating units within our scene. Waves can be used on any spawn point. Waves are simply data, read by spawn points to build live units in the game.

The waves contain wave items, which includes additional data for how the units should be built:

By providing these simple knobs, we can easily spawn items faster, slower, nudge the position, and feel out the progression.

In general the Baddy class provides ‘sensible defaults’ for what you would expect, and then you can tweak things by providing overrides in the wave item. When doing this its useful to consider the values as ‘deltas’ or differences to the original values. For example ‘speedModifier’ is a number added to the initial speed of the baddy, instead of overwriting it.

You can use Json, or Google Sheets or stone tablets to store the content. I am using MonoBehaviours on prefabs.

I have a feeling some people may mention ScriptableObject. Personally I feel Monobehaviours provide more flexibility, and allow for multiple items on one object. At the end of the day its about finding a format that works for your team.

The starter project is quite unfinished. Especially since you can’t win or lose anything, and there is only one level. But because of the focus on gameplay, I can do a lot to that one level. Check out the project, and see if you can make something better with the tools given!