As I work on my Project Search & Replace tool I get to learn a lot about the internals of Unity. I’m currently adding the ability to search and replace prefab instances to the tool(edit: now out in v1.1!), and I’ve also written a free utility for prefabs (scroll down to the Prefab Hierarchy Inspector or check it out in the code archive). We are going to go deep into some un(der)documented areas of Unity. Are you ready?!

Prefabs are not GameObjects, but instead contain GameObjects. They are a special UnityEngine.Object type called Prefab that is returned when you call PrefabUtility.GetPrefabObject(). When you look at a prefab in the Project tab, you are actually looking at the GameObject and Components inside the Prefab class.

Most of this post I gleaned from using my SerializedPropertyViewer. I was looking through Unity Decompiled and I saw these interesting lines in PrefabInspector.cs:

It didn’t occur to me that you could get a Prefab class and use SerializedObject to get the internal information! Much properties. So wow! So here is some missing documentation on the Prefab class which is accessible via SerializedProperty.

m_PrefabParentObject is a reference to the prefab object (not class) that is the ‘parent analog’. For example the Transform of ‘ChildInstance’ points to the Transform of ‘Child’ in the Prefab. This is used along with PropertyModifications to apply the modifications to the instance (more on that later). When you use PrefabUtility.GetPrefabParent() the object within this property is returned.

m_PrefabParentObject is essentially non-editable in my findings, or at least changing it has little benefit.

Its interesting to note that this design makes it look like inheritable prefabs were part of the original designs for Unity. Of course, why wouldn’t it be? I have written my own prefab systems with multiple levels of inheritance in my own game engines and well, it wasn’t really that hard. But it wasn’t fast either, so maybe that’s led them to not implement more levels of prefab inheritance.

As the prefab instance is built, ie. as it creates a new GameObject or Component, it looks at the modifications and determines if it needs to apply a change.

So how is a prefab instance built when you’re in the editor?

Some of this is speculation, so I might have missed some details. I would love any additional information Unity engineers! 🙂

As the editor creates a Component for the instance it will point the m_PrefabParentObject to the corresponding Component in the prefab. At some point (maybe immediately, maybe later, I can only speculate) it will iterate over the Prefab’s PropertyModifications and check the m_PrefabParentObject and if they match, it will apply the value or objectReference to the instance.

Building a Prefab Instance at Runtime

So does building a prefab instance at runtime work like the editor? Signs point to no. This post on serialization talks about the details:

So the steps I mention above are applied to the GameObject within the scene and then baked. All Prefab information such as the Prefab class, m_PrefabParentObject, m_PrefabInternal is lost upon baking. There is no concept of prefabs at runtime (and this is probably another reason we do not have nested/inherited prefabs). My assumption is that this is a performance consideration.

The serialization post also has some interesting information when using Instantiate():

So even though the object in the scene isn’t a prefab….for all intents and purposes you can call Instantiate() on it anyway and get the same effect. But you can’t expect to be able to determine if the object is derived from a prefab in the project. This occurs in the Editor as well. If you want to instantiate a prefab in the editor and have it maintain a reference to the original prefab you must use PrefabUtility.InstantiatePrefab().

While this may be academically interesting if you are an engine geek, you may be asking what can I do with this information? Well you can programmatically swap out prefabs and also modify internal prefab values.

Use the following code at your own peril. Code driven by stunt coder on private course.

Getting the Prefab object.

For any UnityEngine.Object within a Prefab or instance you can get the Prefab class like so:

As far as I know it is not possible to cast this object to a Prefab type. The best way to work with this object is to use SerializedObject:

Swapping out a Prefab Instance

The propInternal SerializedProperty allows us to modify what Prefab class the object points to. If you do this on the root object of a prefab instance and work a little magic, you have swapped the prefab for a new one!

The above code points one prefab instance to another. BUT it does not take into account PropertyModifications, meaning that the m_Modifications targets are now wrong. As far as I can tell this does not tragically break Unity, thankfully. So perhaps we could change the target of the PropertyModification to an Object in our new prefab? Why yes…you can!

But…how? Prefabs can have completely different hierarchies, objects could be missing, renamed, or moved. This is a hard problem (one I have solved in Project Search & Replace but I won’t get into that here). First you must somehow ‘map’ the hierarchies of the two prefabs in order to migrate the targets.

But if for example the PropertyModifications are simple, say on just the root transform, it is quite simple to iterate over them and change them:

And now the targets are fixed, and the prefab has been swapped. This method is super complex, but allows for the migration of information between your prefab instances instead of simply overwriting and re-creating it by hand!

While implementing the above code I spent a good amount of time working on prefabs in the Project tab. And while doing this the same recurring thoughts kept coming back to me:

So I wrote an editor window that allows me to see the entire prefab hierarchy. 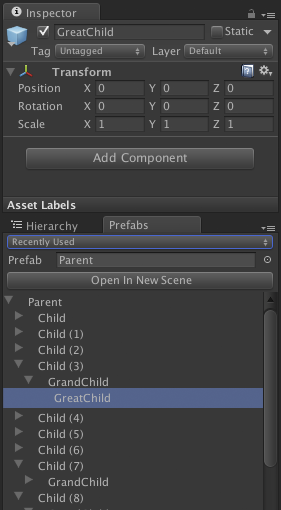 But why does Unity default to only 1 level deep?

From a bit of exploration, it seems that this is a design decision on purpose. This thread on the Unity forums sheds some light:

We’ve limited that to one level for a few reasons:
– A larger level made by an artist can have many, many game objects inside it. Letting people make references to game objects deep in the hierarchy seemed to be dangerous, as it would be too easy to introduce code dependencies on arbitrary art assets.

– In code-based prefabs, its usually more flexible to have some accessor properties in the root game object that has pointers to what you need.

I completely agree that putting accessors in your root object is the way to go. But I don’t know how well this artificial limit really helps that. I shall be using my hierarchy inspector and see if I ended up still dragging stuff into scenes in order to see what I’m modifying.

In my explorations of Unity internals I heavily rely on SPViewer, a free tool I have written to view the serialized form of Unity Objects within the editor. In order to view the m_PrefabInternal objects of prefab instances I have updated the code to view UnityEngine.Objects that are internal to other objects (because you can’t drag an Instance Prefab into the editor window).

I hope you’ve learned something new about prefabs in Unity. And thanks for indulging  me by reading this far. After this week’s work it seemed worthwhile to document my experience so that perhaps others can find interesting uses for what I have discovered.